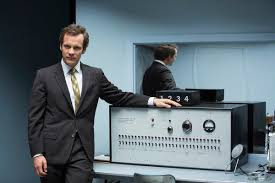 Another late movie recommendation!  I am always behind in movies.  Kanopy recommended to me Experimenter, a 2015 movie with Peter Sarsgaard and Winona Ryder and the answer to your pressing question: "Where has Anthony Edwards been?"  That's right, Dr. Greene, or Goose, or Gilbert, is still a working actor.  The movie is based on the true story of Dr. Stanley Milgram and his controversial experiments starting in 1961 at Yale testing if people would willingly deliver electric shocks to another person.  Testing to see how far the subjects obedience to the experiment/authority would go.  An experiment to help understand how people suspend their ethics to obey authority - think Nazis at a concentration camp.

I thought Lewis had a great quote in The Screwtape Letters.  He does mention how today's evil is done by men in starched collars with clean, trimmed fingernails and that is why he had Hell set in a government/big business/office/bureaucracy.

I also thought of Mark Studdock in That Hideous Strength.

"This was the first thing Mark had been asked to do which he himself, before he did it, clearly knew to be criminal.  But the moment of his consent almost escaped his notice; certainly, there was no struggle, no sense of turning a corner.  There may have been a time in the world's history when such moments fully revealed their gravity, with witches prophesying on a blasted heath or visible Rubicons to be crossed.  But, for him, it all slipped past in a chatter of laughter, of that intimate laughter between fellow professionals, which all earthly powers is strongest to make men do very bad things before they are yet, individually, very bad men."

found towards the end of part 3, in chapter 6

I am not quite sure the quote fits with the theme of the movie, I may be forcing it.  But, I wanted to recommend the movie.  If you can think of a better Lewis quote, please share. 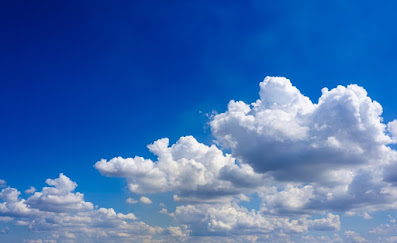 What does "he ascended" mean except that he also descended into the lower regions of the earth?  The one who descended is also the one who ascended far above all the heavens, that he might fill all things.

It is not an accident that simple-minded people, however spiritual, should blend the ideas of God and Heaven and the blue sky.  It is a fact, not a fiction, that light and life-giving heat do come down from the sky to Earth.  The analogy of the sky's role to begetting and of the Earth's role to bearing is sound as far as it goes.  The huge dome of the sky is of all things sensuously perceived the most like infinity.  And when God made space and worlds that move in space, and clothed our world with air, and gave us such eyes and such imaginations as those we have, He knew what the sky would mean to us.  And since nothing in His work is accidental, if He knew, He intended.  We cannot be certain that this was not indeed one of the chief purposes for which Nature was created. 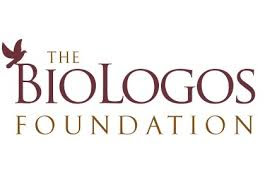 I may have mentioned my recent discovery of the podcasting world - if not here, then in an email to the group.  Less than a year ago I obtained my first smart phone and the world of podcasting exploded in my life.  Prior to that I knew about podcasting, but to enjoy them I had to download an episode on my computer, plug my old phone in and attempt to transfer the file.  Most were too large, so I basically found a few sources I liked that had small enough files to fit on my phone - usually one or two at a time.  So this was something I would be doing a few times a week.  Wow, the difference technology can make.  Now I carry on my phone hours upon hours of podcasts, and even complete audio books, and music!

Since the previous posts featured Dr Francis Collins and his Templeton Prize acceptance speech I will continue with Dr Collins - after all, you usually only win such a prize once, and add to that Dr Collins being head of NIH, he is getting a moment in the sun.  However, I am sure he will trade any sun he is getting for an end to the pandemic.

Follow this link to listen to Dr Collins talking, on a podcast, about his life, conversion - this is where C.S. Lewis comes in!, and the work of The BioLogos Foundation.  It is a 2 part podcast available on their website or many podcast platforms.

This video is just Dr Collins giving his acceptance speech - much shorter than the entire ceremony.  Worth a listen, words that are needed today.
By CJK at October 20, 2020 No comments:

The ceremony for Dr. Francis Collins acceptance of the 2020 Templeton Prize.  I have posted about his winning, but let the ceremony slip past - it was almost a month ago.
By CJK at October 20, 2020 No comments:

"For we are what he has made us, created in Christ Jesus for good works, which God prepared beforehand to be our way of life."

". . . the Christian is in a different position from other people who are trying to be good.  They hope, by being good, to please God if there is one; or - if they think there is not - at least they hope to deserve approval from good men.  But the Christian thinks any good he does comes from the Christ-life inside him.  He does not think God will love us because we are good, but that God will make us good because He loves us; just as the roof of a greenhouse does not attract the sun because it is bright, but becomes bright because the sun shine on it."

The main idea from Lewis is right on, but one might take issue with his 2 sources of motivation for doing good (in this quote), if you are not a Christian.  I am sure there are committed and "default" atheists who do good without seeking the approval of man. 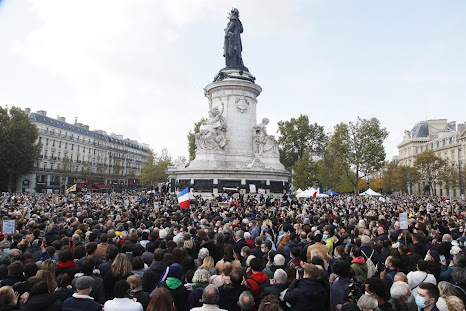 The First Amendment in the United States Constitution acknowledges 5 rights - religious freedom, peaceful assembly, petitioning of the government, a free press, and the freedom of speech.  These 5 rights are not absolute freedoms without limit and a class on First Amendment court rulings would be very long to be anywhere near exhaustive.  In the meantime here is a quick hour long program from the National Constitution Center you may find informative.

I just read the news concerning a French history teacher being killed by an 18 year old man, with others involved, for showing and discussing caricatures of the Prophet Muhammad in his civics class.  As an American I personally have an historical connection to the French and their desire for freedom which is shared with our's following our revolutionary period.  Their first attempt did not end well and violence became a driving force in the termination of that attempt.  Yet they remain a freedom loving people.

When the context of this incident is the classroom, where free inquiry should find its safest place, one can only hope these events remain isolated events and do not represent but a fringe belief within the Islamic community.

C.S. Lewis has been "flagged" for the few words he did write about Islam.  I would like to agree with "flagging" Lewis, but such actions as Friday's in France do not allow me to.

In August of 2015 I posted a few thoughts on the blog concerning Lewis and Islam, as I was reading The Horse and His Boy.  I will post part of one again:

In the essay "What are We to Make of Jesus Christ?" we find this:

"On the one side clear, definite moral teaching. On the other, claims which, if not true, are those of a megalomaniac, compared with whom Hitler was the most sane and humble of men. There is no half-way house and there is no parallel in other religions. If you had gone to Buddha and asked him: ‘Are you the son of Bramah?’ he would have said, ‘My son, you are still in the vale of illusion.’ If you had gone to Socrates and asked, ‘Are you Zeus?’ he would have laughed at you. If you had gone to Mohammed and asked, ‘Are you Allah?’ he would first have rent his clothes and then cut your head off. If you had asked Confucius, ‘Are you Heaven?’ I think he would have probably replied, ‘Remarks which are not in accordance with nature are in bad taste.’ The idea of a great moral teacher saying what Christ said is out of the question . . . We may note in passing that He was never regarded as a mere moral teacher. He did not produce that effect on any of the people who actually met him. He produced mainly three effects — Hatred — Terror — Adoration. There was no trace of people expressing mild approval."

As found in God in the Dock: Essays on Theology and Ethics

The most interesting sentence is Lewis's view that if one were to confuse Mohammed with God as Christians claim Jesus is, in a Trinitarian reality, he would react with violence, in fact a beheading.  No particular culture has cornered the market on decapitation - the Old Testament has some, the New Testament has a famous one - St John the Baptist.  It is said St. Paul was killed by the Romans in this way.  The French perfected it and the list could go on and on.  I have made some cursory internet searches for beheading in Islam and depending on the translation it is understood by some that such violence is permissible.  I wish I could write that Lewis was a religious bigot who was demonizing Islam and that would be the end of it, or at the least I could just say he was a product of his time.  However, terrorist groups who identify themselves as Islamic use the tactic of beheading and making the act public through video only strengthens the view Lewis has expressed.  We can have discussions about a true understanding of Islam, but until terror groups stop using violence in this manner the truth will be far from us.  This is an Islamic problem and you can bring in economic and political issues that exasperate the problem, but the violence still remains with proclamations connected to the teachings of Muhammad.  The Church is not immune and has culpability in Her past to violence.  Right now, however, the problem is most clearly seen in the news and, again, Lewis's sentence has resonance.

Lewis does say somewhere, off the top of my head, that a religious fanatic is the worse kind of fanatic as they believe they have God on their side and the ends will almost always justify the means.  I will have to look that up.
By CJK at October 18, 2020 No comments:

The Christmas season, for me, usually means my annual trip to the movie theater.  I average about one trip a year and as far as I can r...